Transcending the Three Gunas
– The Primary Forces of Creation

Within the classic Indian scripture TheBhagavad Gita there is insightful discussion on the qualities of forces that make up nature and creation.  These forces are called gunas (pronounced gun-a), a term defined as strand, thread, rope.  They are the intertwining forces that weave together to make material nature, including human consciousness.  These forces are divided into three categories, whose qualities are tabulated below, yet the Gita points out that it is possible to go beyond the gunas, to transcend their characteristics. He who endeavors to do so creates ultimate freedom by balancing their essence in their true, authentic Self which goes beyond the forces of nature and resides in non-dualistic divinity.

Listed below are the three gunas: Sattva, Rajas and Tamas. According to Yogic philosophy, everything is made up of the gunas in different proportions.

In the Bhagavad Gita, Arjuna asks Krishna how he can recognize the man who has gone beyond the three gunas, and what has he done to have gone beyond them?  Krishna replies by listing the characteristics of such a person and by reiterating the central theme in the Gita: non-attachment to the fruits of one’s labor:

Whatever quality arises –
Light, activity, delusion –
He neither dislikes its presence
Nor desires it when it is not there.

He who is unattached,
who is not disturbed by the gunas,
who is firmly rooted and knows
that only the gunas are acting

who is equally self-contained
in pain or pleasure, in happiness
or sorrow, who is content
with whatever happens, who sees

dirt, rocks, and gold as equal,
who is unperturbed amid praise
or blame of himself, indifferent,
to honor and to disgrace,

serene in success and failure,
impartial to friend and foe,
unattached to action – that man
has gone beyond the three gunas.

He who faithfully serves me
with the yoga of devotion, going
beyond the three gunas, is ready
to attain the ultimate freedom. 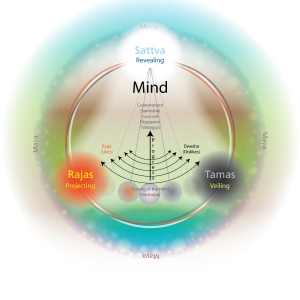 With love and respect,